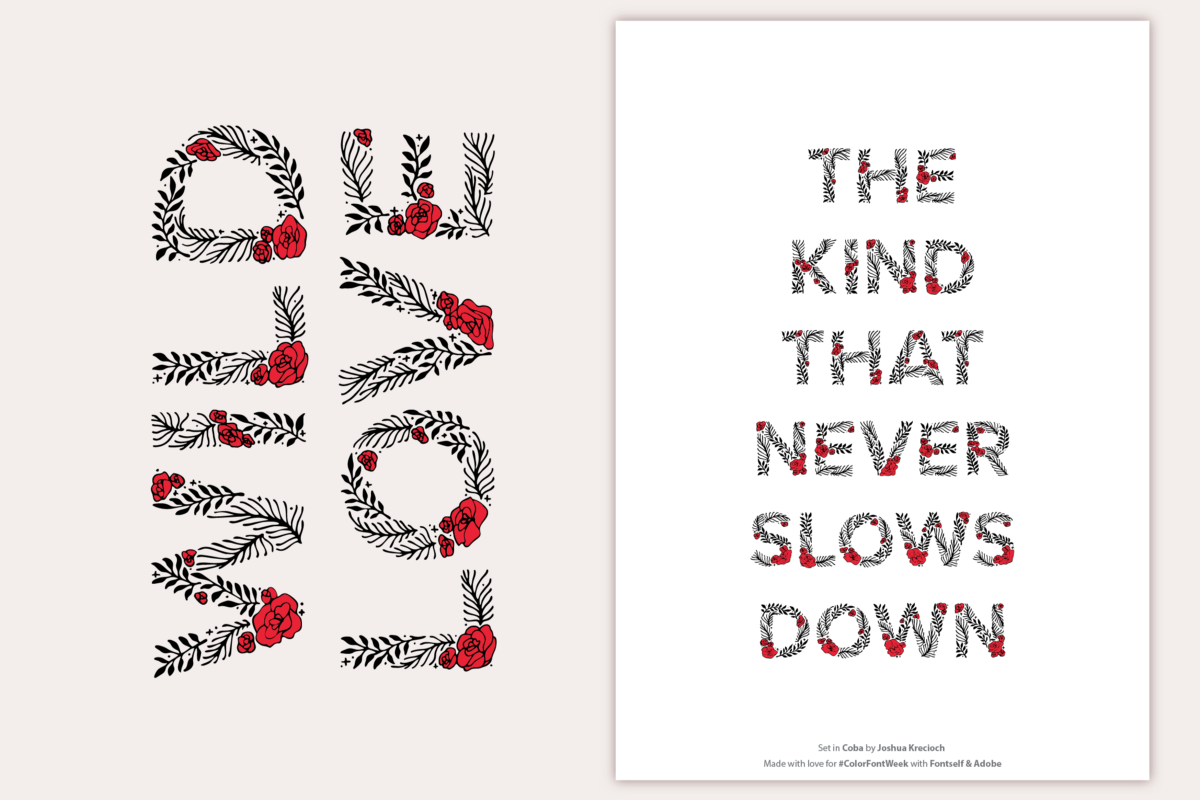 The 24 years-old designer and father of two Joshua Krecioch has always been drawing. Growing up among a family of 7 children in Milwaukee, Wisconsin, drawing allowed him to escape the momentary chaos of a large family and helped him in finding his own space. His extraordinary lettering begins life as inked drawings and are then, translated to Bézier curves in Illustrator. His meticulous attention to details is striking throughout his portfolio.

How did you get into drawing letters ?

I always enjoyed drawing and painting, it was an easy getaway. I followed suit of my older brother who is now an Artist based out of Chicago. He had Dondi White’s graffiti book out on his desk and as I flipped through the pages I fell in love with this new art form I’d never known, Graffiti.

From there on, each day after school we would come home and sketch endlessly in our black books. There was so much fluidity and style while still being able to retain the original letterform. It was around this time that I decided I was going to pursue a career as a Graphic Designer. As I explored Graphic Design I realized that it was important to have a ‘specialty’ within design and I stuck with my love of Type.

Working from home and having two little ones running around it can be quite challenging sometimes getting into a rhythm. So first I make sure I have my own space that is clear and work ready. Depends on the mood that day, but I’ll generally have music or a podcast playing.

When I first start a lettering piece I like to work quickly on its composition small scale; so I’ll end up with 10–15 little thumbnails of different ways I can position the type. I like to narrow that down to the ones that catch my eye the most and from there get to sketching. I already have a bit of an idea going into the piece what style fonts would work best for that particular project.

I like to work very gestural until I get something that I like, and then from there I can fine tune. It can get quite repetitive, so I like bouncing between projects to keep things fresh.

Did you ever create fonts before?

I’ve messed around with the idea before. I’ve drawn up plenty of Alphabets, but I never actually knew how to go about using the other font making software.

Honestly I couldn’t believe how smooth it made the process. After just a single 5-minute tutorial I had been able to navigate the application comfortably and within 20 minutes, I had my first font made. Unbelievable!

What was your inspiration & creative process to make your color font?

I had done a similar floral font as an apparel design a while back and it got a great response. A few people asked me to draw out their names in that style and while I was flattered they liked it and I wanted to, it would have taken me hours to draw those few names. So it made sense to create a full font in this floral style.

What were the key challenges when designing your color font?

I expected to have a lot more difficulty navigating a font making software, but to be honest I only had two issues. And that came down to one, keeping letters all on the same baseline before dropping the characters into Fontself. Secondly, I had way too many anchor points in each character so I had to simplify each object down quite a bit. Other than those easily fixed problems I found this to be very easy to navigate.

It’s easier than ever to create your own color-font with Fontself. Pick a theme and get creative with it!

Whose lettering would you love to see turned into color fonts?

Ben Johnston or Gemma O’Brien! Absolutely love their styles, they would make some killer color-fonts.

You can also download the font Coba for free with its Valentine’s card during #ColorFontWeek on https://www.fontself.com/colorfontweek/#coba

And you can also use it for free on your mobile within the Fontself app: https://m.fontself.com/Uy39BXMn7T