Turning Alice in Wonderland into a color font 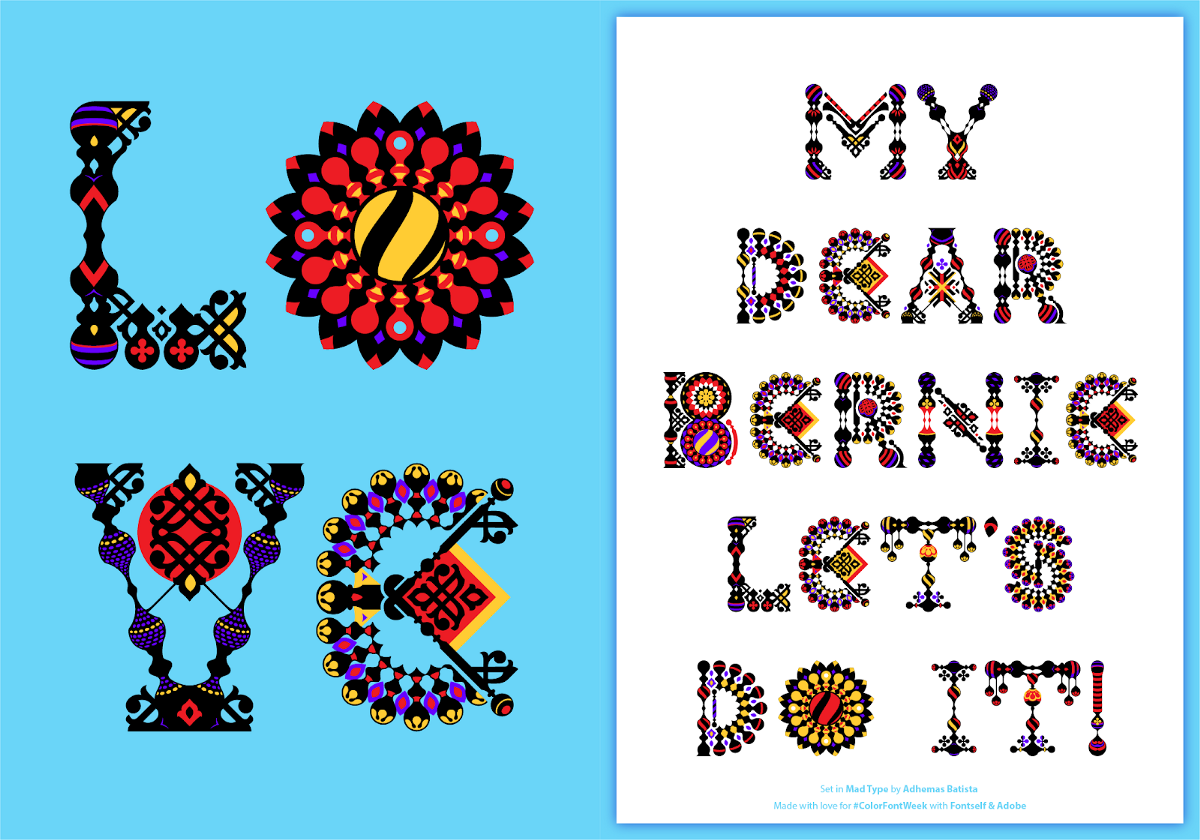 The font Mad Type and its Valentine’s card are free during #ColorFontWeek.

Adhemas Bastista’s creative career begins at age 15, while he taught himself to code and design websites. Since then, the Brazilian digital artist has come a long way. It is now from Los Angeles that he crafts his vibrant colors, ornamented graphics and organic forms, while leading the design department of Deutsch Advertising.

The so-called “hybrid-designer” has worked for international brands such as Absolut, Adobe, Danone, General Motors, Microsoft, Nestlé, Nike or Coca-Cola and earned several awards. In 2016, he was involved in the short animation “Malak and the boat” for UNICEF, which tells the story of a Syrian children refugee trying to cross the Mediterranean. The same year, the whole campaign won the Grand Prix for Good in Cannes Lion. We got in touch with Adhemas Batista to talk about how he created his first ever color font Mad Type. Interview below👇

How did you get into drawing letters & what keeps you doing it?

I love fonts, I collect them and I love drawing letters. However I am not a typographer, just a hobbyist on that area. I have made multiple fonts over the years but they are mostly unfinished. The typefaces I’ve designed are for display, for branding design. They are more artistic with lots of personality.

I usually create shapes that I maybe be using for an illustration or a design device, then I realize I could make a letter out of it and my process begins. I like to start creating letters for one word and then expand to other letters.

Adobe Illustrator is a primary tool for many things I create and I have always been looking for an easier way to turn my letters into a font. When I first heard about Fontself, the first version was still in beta. I didn’t think twice and got it. It is super handy and smart.

What was your reaction when you first heard about color fonts?

I am all about colors and hearing about color fonts made me so happy. Finally I could express myself as an artist with my own fonts.

What was your inspiration & creative process to make your color font?

I love the tail of Alice in Wonderland, it tells a lot about the human condition I think, and when I made some of the letters, it kind of reminded me of the story, specially because I thought I was going insane making all those complex symbols. It took me a while to figure out a system, total madness. My biggest challenge was to balance out the colors of the overall font, they would vary from one letter to the other but still keep them as unite as you write words. I didn’t want the letters to feel repetitive in colors when matched together. Made Type is my most insane font project and I am happy this is finally coming to life. Hope you like it.

Colors are trick, if you don’t want to end up with an unbalanced font, keep testing the characters against each other to see how your font will behave in different words, then adapt the colors as needed.

You can download the font Mad Type for free with its Valentine’s card during #ColorFontWeek on https://www.fontself.com/colorfontweek/#madtype

And you can also use it for free on your mobile within the Fontself app: https://m.fontself.com/OvHHNTNs7T