Catapult is a companion service to Fontself Maker for Illustrator CC, our font creation extension.
Just click 1 button, and there you go: you've just made a web & mobile font ;)

No mess with font files (just use 2 lines of code)

Use your own fonts mobile

Showcase a widget of your fonts anywhere

Send creative messages on your mobile

You can now sync your fonts directly to your smartphone in the Fontself app.
(iOS only for now, Android coming next)

See the Pen Gilbert Spiral 16:9 by fontself (@fontself) on CodePen.

Fontself Catapult is a one-click hosting solution to use any font created in Fontself Maker on the Web or mobile.

How can I get access to Catapult?
The service is currently available as a beta for our Illustrator users.

‍What’s the difference between Catapult and other webfont services like Typekit or Google Fonts?
‍Catapult hosts your user-generated fonts while Typekit, Google Fonts and many other services distribute fonts that were preselected from a list of vetted designers.

‍What happens when I click on the "Catapult" button?
‍Your OpenType font file is uploaded to the Fontself servers, converted as webfont files and provided to you via several embedding options.

‍Are my fonts available to everyone when I catapult them?
‍No, by default they are private. You can however manually allow specific website domain(s) to display your fonts.

‍Can I use Catapult to host any font?
‍Nope, you can only host fonts designed by yourself and made with Fontself Maker.

Can I upload color bitmap fonts?
‍Not yet. Due to file size challenges, bitmap fonts cannot yet be hosted on the web.

‍What browsers are supported?
‍Fonts served from Catapult work in all browsers which support web fonts on macOS, iOS, Windows, Android, ChromeOS as well as most other desktop & mobile browsers.

However, color fonts are currently not supported everywhere. Check the latest browser compatibilities on www.colorfonts.wtf

‍Advanced font features are also not available across all browsers (see Edge or Opera on kerning, ligatures or alternates).

‍How much does it cost?
‍Catapult is currently available as a free beta. Pricing will be announced at later stage. 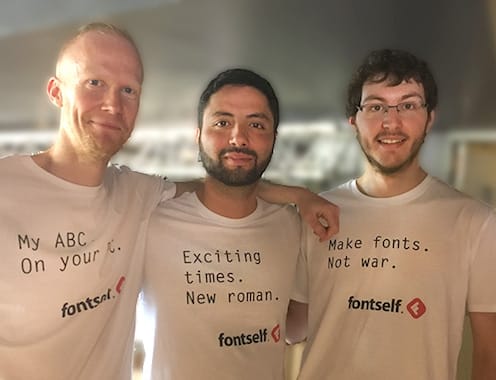 Hello, we are 3 guys with a simple goal: to bring you the most user-friendly font creation tools. Yep, 'cause self-expression rules !!! ✊

Our journey started back in 2006. We had several attempts along the years, but in 2015 something really cool happened: 760 Kickstarter backers decided we should keep working and ship some of the cool prototypes we'd built.
We are now dedicated to crafting creative tools that any creative can use.

Oh, if you make some really cool stuff with Fontself Maker, we’d love to see it & share it with the community. So feel free to ping us, or to tag your creations on Twitter & Instagram with #fontself