Bitmap fonts﹣the (other) future of type

Or How We Learned to Stop Worrying and Love the Pixel. 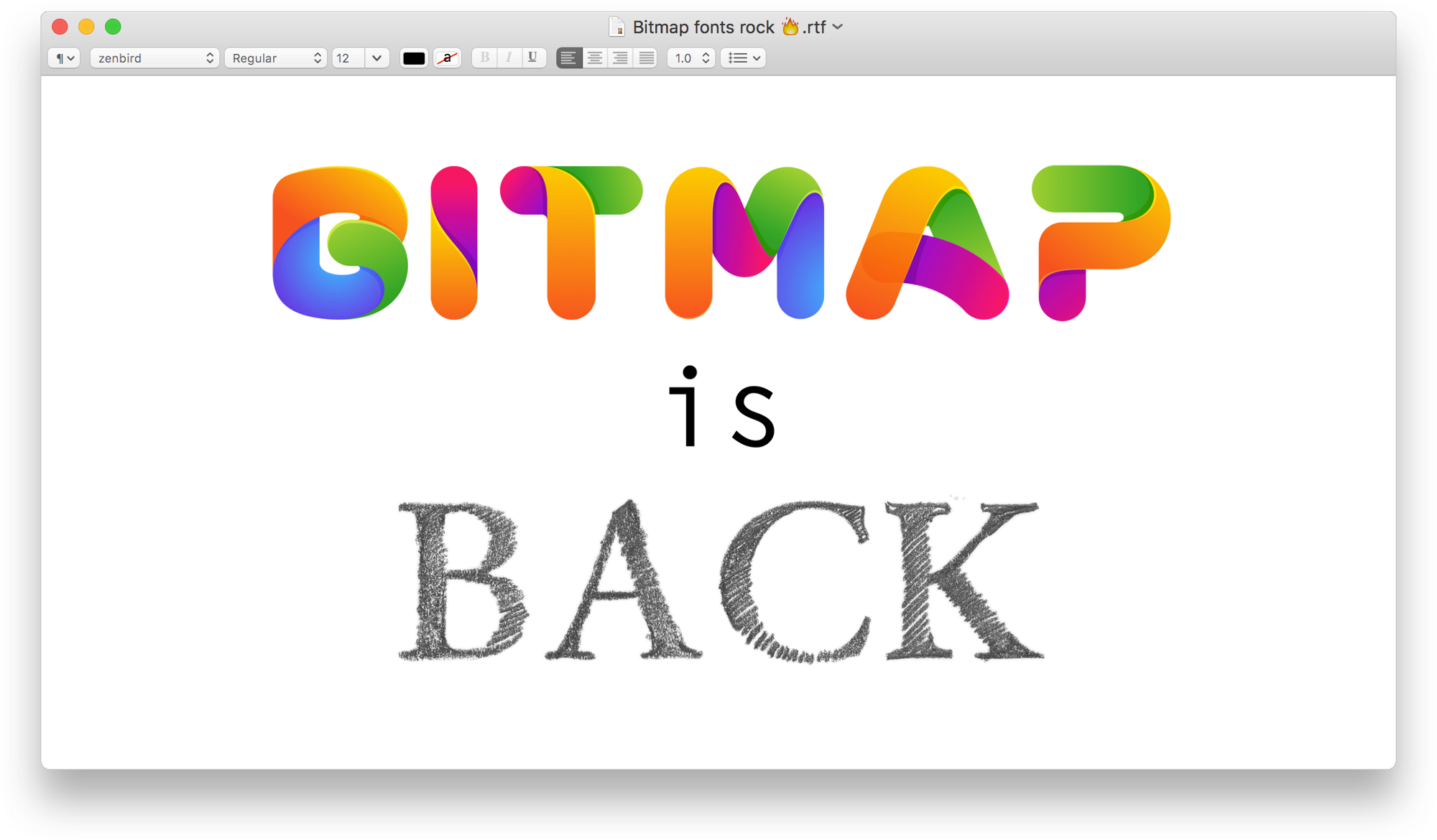 At Fontself, we love typography, but we love creative people even more... So when the type community got excited about the news related to variable fonts and started wondering about their implications, we felt like another key typographic innovation deserved to be highlighted.

Because this one will truly impact the entire graphic industry.

Most of the texts we see around us— on computer screens, printed magazines or industrial products — are designed and conceived from vector fonts, which have the convenient property of being infinitely scalable.

While text display technologies initially started with bitmap-based fonts (each letter being defined by a limited set of pixels), most font creation tools and font technologies eventually moved to vector-based workflows, and they are now geared for a specific audience of type designers who end up creating most of the vector fonts we see and use on a daily basis.

So, why should we care about bitmap fonts, specially when innovation doesn’t stop around vector fonts?

When we started Fontself, our goal was not only to lower the complexity of creating personal fonts but also to explore new creative possibilities, such as displaying the original colors, textures and the variety of shapes creatives can make with handmade lettering.

Bitmap fonts turned out to be one of the direct answers to this quest for creative freedom. By representing a character via a raster image instead of its vector representation, we can leverage the chromatic informations of each pixel to display handcrafted lettering in a digital form.

Over the past decade, we’ve built font creation tools & font rendering technologies that would empower creatives with such capabilities, but we ultimately managed to tap on the ongoing developments around color fontsfrom leading industry players, so we could focus on the next big challenge for designers: how to actually create bitmap fonts.

So where’s the catch?

While the benefits of pixel-based fonts look obvious, there are a couple drawbacks that may explain why they are still a relative rarity in the graphic industry:

At Fontself, our take is that each of these limitations can now be mitigated:

Also, Microsoft, Google, Adobe and Mozilla agreed in early 2016 on an open standard to represent chromatic fonts under the W3C umbrella (it’s now simply called OpenType SVG, and it supports bitmap images along with vector shapes).

With Apple’s longtime implementation of its own bitmap font format across both MacOS & iOS, and as Windows 10 Anniversary edition added support for all color font flavors in the web browser Edge, we’re confident that the time has come to rediscover the virtues & possibilities of bitmap fonts.

Creatives should rejoice and get ready for a new era of visual wilderness. This is an exciting time for all the adventurers who are ready to experiment on both the creative side as well as the technical side.

It will take months or even years before we can all enjoy a smooth experience of bitmap fonts across all creative tools and communication tools, but this new chapter for the graphic industry will be really fun…

Yes, we know: type-making is serious stuff. You gotta learn the basics, practise like hell for years, and eventually you’ll start mastering the field.

But what about the other 99%? What about the average creatives who just want to doodle their own lettering & have fun with a handmade font?

In late 2015, the Kickstarter community decided to back our project Fontself, which aims to bring easy font creation tools to many creatives. Then, in early 2016, we launched Fontself Maker, an add-on for Illustrator CC that introduced a novel way to make vector fonts easily: with drag & drop.

Today, it’s late 2016, thousands of graphic designers & illustrators are enjoying Fontself Maker, and we’re now bringing type-making to many more with the introduction of Fontself Maker for Photoshop.

Any Creative Cloud user can now create AND use their own fonts in Photoshop, whether they are vector fonts… or color bitmap fonts.

So, now, wanna learn more about color fonts, where this all started, where you can use them and how you can create them? Read our post on color fonts or quick start your first color font with our step-by-step guide to color font creation.

Oh, and subscribe to www.colorfonts.wtf — THE place to get great color fonts and hear more news about them.

PS: ok, so we hear your comments, there’s also this shiny OpenType SVG font format that brings color support to vector shapes as well. And creative people have already used it to make color vector fonts. It is obviously a very interesting option for designs that don’t require the specifics of bitmap images. Well, Fontself will be back soon with more news & details related to this unique capability.

Because, you know, … Vectors, bitmaps, we should just love them both.

PS1: special thanks to Roman Korolev & Pierre Terrier for their gorgeous color bitmap lettering in the title image.

PS2: another thumb up to Sairus Patel, who’s helped me over the year get through the specifics of SVG fonts, SVG-in-OpenType, OpenType-SVG and OpenType SVG (or whatever you may call it ;)

PS3: kudos to the Photoshop team (and specially to Catherine Jenks Gee & Vinod Balakrishnan) for bringing color fonts into the hands of millions graphic designers, this is a huge step forward for color typography.