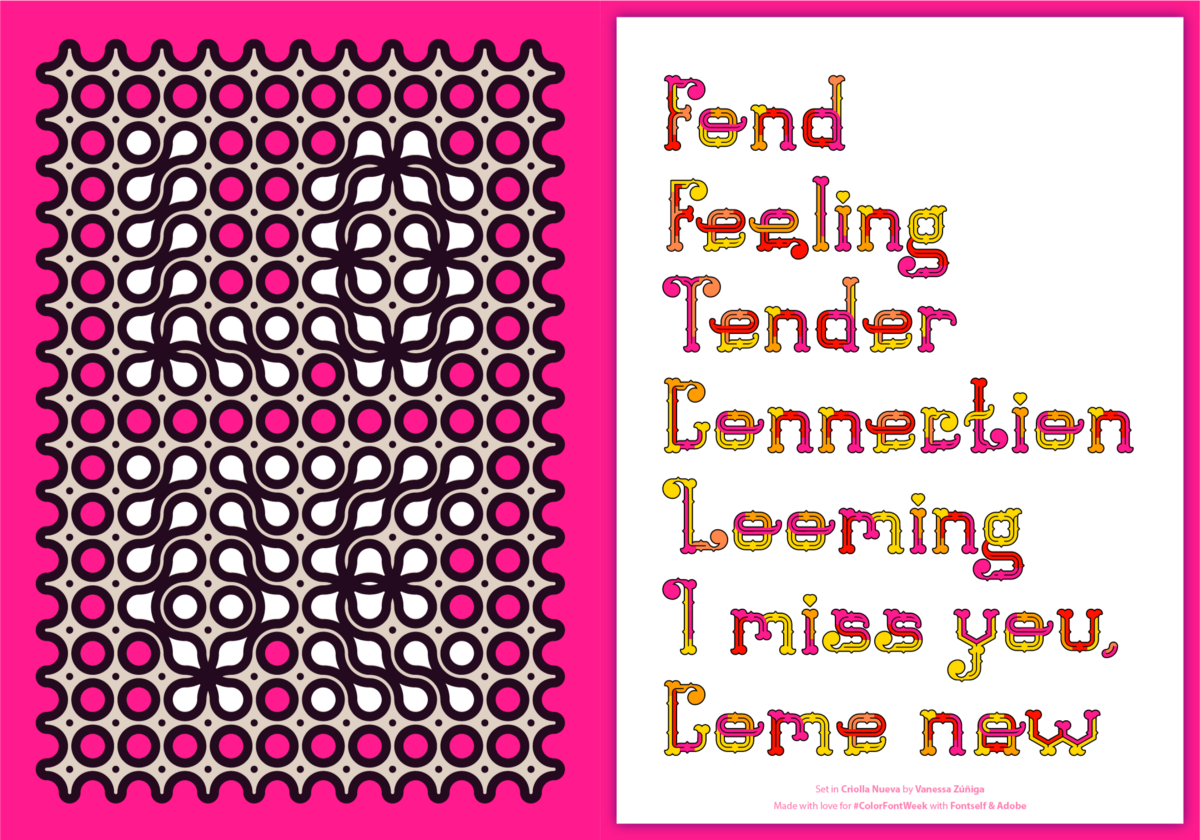 Vanessa Zúñiga, aka Amuki — “inner silence” in the Aymara-Quechua language — is an award-winning Ecuadorian designer who creates bright, intricate patterns and typefaces inspired by ancestral cultures of Latin America. With a Masters in Design and an MBA in Strategic Marketing, she embarked on a quest to spread appreciation for Latin American cultural heritage through design.

And she’s already done a lot!

Amuki is the author of Visual Chronicles of the Abya Yala, a 200+ page book showcasing 17 experimental typefaces, 425 Andean patterns, and over 40 illustrations and 115 visual signs. This 15-year long project has earned her international recognition, including two Type Directors Club’s awards.

We got in touch with Amuki to talk about her creative process, especially her unparalleled knack for hacking type technologies like Fontself Maker to create stunning patterns. Interview below👇

How did you get into drawing letters & what keeps you doing it?

In 2007, during my studies, I started experimenting with letter creation for my research project Visual Chronicles of the Abya Yala. This is an ongoing project that focuses on creating new motifs, typefaces, illustrations, and more, inspired from visual signs and symbols from original Latin American cultures. The overall goal is to demonstrate that these ancient signs and symbols can be used in new visual contexts, allowing for a new appreciation for Latin America’s past.

At the moment Visual Chronicles Abya Yala includes 100 “experiments” made up of 40 fonts, more than 10,000 Andean patterns, illustrations, icons, posters, a repertoire of visual signs, and more.

The typefaces were born from the morphological analysis of visual signs from original Latin American cultures. My creative intention for using these signs is to demonstrate how we can generate our own resources that contribute to the enrichment of Latin America’s visual identity.

Did you ever create fonts before?

I started creating complete alphabets in 2007 but most of them were only designed as a collection of vectors shapes. I only converted 5 of them into actual font files.

When I start an experiment, the first step is to analyse the visual signs from an archaeological piece and generate modules. These modules will serve to illustrate each letter, and to make patterns and illustrations. Every experiment can take between 1 to 3 months.

I’m recently worked on experiment №100. The goal is to continue expanding the project to include other original cultures throughout Latin America.

Concerning my fonts, they are a continuation of my project Visual Chronicles of the Abya Yala. Some of them I made for design conferences, mainly to motivate young people to look at their roots and their past without prejudice, and to notice the potential behind our history.

Visual Chronicles of the Abya Yala is a colossal project filled with so much beautiful and diverse work. What opportunities did it bring?

This 15-year long project earned me a finalist spot in the Ibero-American Design Biennial exhibition, and some of my typefaces from the book have been selected by the Bienal Tipos Latinos. I was also a recipient of a Certificate of Typographical Excellence from the Type Directors Club, with whom I also taught workshops and lectures to Latin American youth emphasizing the importance of research in the process of creating patterns, illustrations and experimental typefaces.

What was your reaction when you first heard about color fonts?

The first time was when I saw a post about the Fontself extension on Facebook, the video caught my attention. I went to the Fontself page and analyzed the things that could be done with the extension and what others were designing. My first feeling was that it was the solution for my modular typefaces — it offered me the opportunity to make multiple alternates for modules and to select them quickly. This way it would be easier for me to illustrate each letter, pattern or whatever I wanted. I got the extension immediately to see.

I saw a tutorial to see how it worked and then I started uploading my modules. I went up to about 10 modules and tested a bit. I was thrilled to see the results — it was what I had been looking for! Then I went up to 50 modules, then 100, then 250, including their possible alternates. Like every experiment with something new, you have to try, make mistakes and solve them. Fontself Maker is very easy to use.

What were your source of inspiration & creative process to make your first color font?

My inspiration came from experiment №46 of Visual Chronicles of the Abya Yala which is a typeset with 112 modules. To create a color font, the goal was to add color to make composite modules. To do so I took the 112 modules, combined them with 2 colors and I got 250 basic composite modules. From here I obtained at least 4 alternates, that is, I went up to approximately 1000 modules. Then I began to illustrate.

With 250 modules you can obtain diversity for fonts and patterns. The challenge is to have a repertoire of modules that allows me to do what I want.

What were the key challenges when designing your color font?

More than a challenge, it was a task of patience. To get up to 250 main modules and their alternates I had to divide the project into 5 parts: 3 main parts that contain the modules, 1 with separators with different heights and widths, and 1 that is an ongoing process to define special modules that will be used for specific illustrations. I’m always creating more modules throughout the entire process.

I intend to illustrate complete alphabets with the modules I’ve already uploaded. The possibility to switch out the modules also gives me many possibilities when it comes to generating patterns and illustrations.

How about Criolla, the font you designed for ColorFontWeek?

CriollaBat is a dingbat font that was born from experiment №78 that I performed during my research. The creative process was aimed at expanding the repertoire of modules in order to have more combination alternatives and generate larger structures. CriollaBat has many visual references, from the modular source Fregio Mecano which is a set of 20 geometric shapes to build letters and images, details of the Bone font of Carga Máxima, analysis of several sources to observe the joints and a lot of geometric work so that modules combine with each other.

The most challenging part was to make the basic modules fit together, then start making changes, generated approximately 100 modules, with which you can build letters, illustrate, generate patterns, its use depends on who uses it, your imagination is your limit.

The main font is CriollaBat, and the Criolla Nueva font was generated as an example of what can be built with the modules.

What are you most excited about regarding color fonts?

Alternates! Until now, all my creations with alternate glyphs were done in Processing. I had to define a specific number of modules and interchange them in Illustrator in order to get specific letters. With color fonts, I have many alternates to choose from and I can change them at will. I also have more possibilities to create patterns and illustrations.

Do you believe that color fonts or Fontself will impact your projects and workflow?

Totally. Now I will be able to put modular typefaces into practice and sell them. I have always wanted a tool that allows the user of my fonts to use the modules to their liking — it makes their work much easier. With Fontself, the modules can be used to create marks, letters, patterns for textiles, jewelry, illustrations… it’s up to your creativity!

Color fonts arrived and facilitated the process of creating the modular typefaces within my research project. The Fontself extension is very easy to use and has very large potential. My advice is to have fun using it, and to dare to look at it from different angles and go further.

We stumbled upon your online shop, can you tell us more?

Yes :) At the end of 2014, I launched my own fashion and accessory line, Rukuyaya, where you can buy scarves, shoes, ponchos, and more, all beautifully decorated with my patterns and illustrations inspired by Latin America.

Thanks for creating Fontself! I had been waiting for such an easy font tool in a long time, and now I’m going to continue to have fun using it.

You can download the font Criolla Nueva for free with its Valentine’s card during #ColorFontWeek on https://www.fontself.com/colorfontweek/#criollanueva

And you can also use it for free on your mobile within the Fontself app: https://m.fontself.com/R2WBRRVk7T