How passion & altruism lead to the #ColorFontWeek 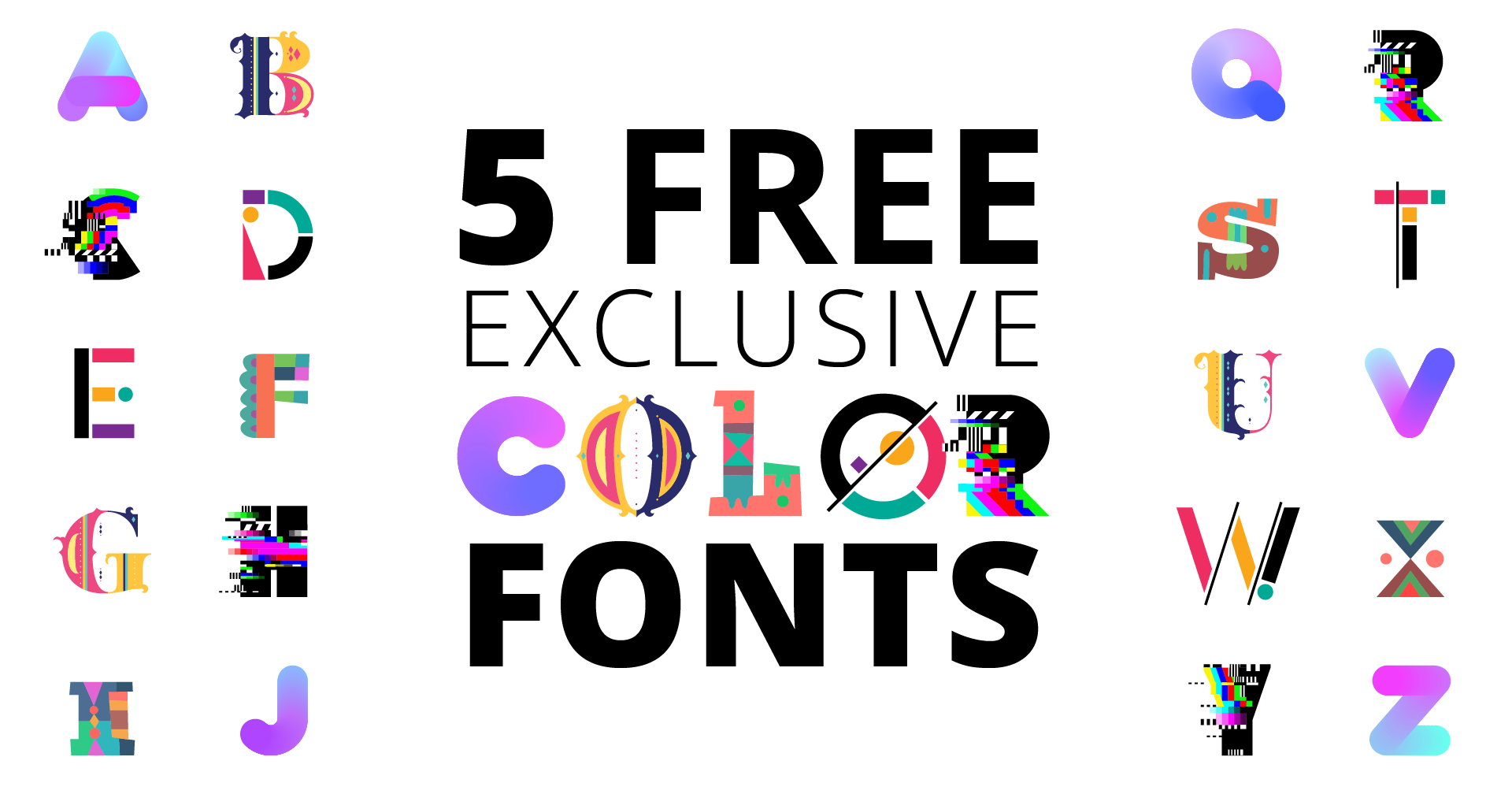 Creativity and generosity often go along. Need proof? Throughout this week, 5 super talented designers from around the world will share with everyone — and for free — something they have carefully, painstakingly and passionately crafted.

Driven by their curiosity to join an adventurous journey at a unique point in time, a handful of independent creatives replied to our call to experiment with a new tool and on a new medium, in order to challenge a pretty unusual concept in digital typography: color.

Because, yes, we are now living the early days of the color font revolution.

Color ❤️ Type (but what about the reciprocity?)

While color and typography have always gone along (Gutenberg’s own prints already featured characters that mixed black and red inks, centuries ago), digital type has mostly remained color blind in its practice, converging toward contour shapes, leaving the characters’ fill to the choice of the end user.

At Fontself, we started experimenting in 2006 with home-brewed color & bitmap font technologies, exploring the creative potential behind them and iterating to bring such capabilities into the hands of many.

But until recently, only a small crowd of type tech enthusiasts could fiddle with a range of font technologies to replicate such visual richness.

And it took until 2016 to get to an inflexion point, when a group from the W3C agreed to bring SVG glyphs into OpenType font files.

The creative community is about to benefit from the hard work of this tiny group of people who envisioned baking chromatic information into font files, so that we can finally type texts that reproduce the colors, shades or textures of any lettering — something that was traditionally done manually or by stacking text effects on top of vector fonts.

Want proof? Just a year ago, Photoshop became one of the first creative app to display color fonts, and we jumped in to demo the potential of bitmap fonts… (but this is yet another story ;)

Two weeks ago, Adobe announced the support of OpenType-SVG color fonts in Illustrator CC 2018, and showcased the free Gilbert color font during its keynote to flesh the news. Turns out Gilbert was actually the very first color vector font created with a early alpha version of our font creation tool Fontself Maker…

After many months of work, we finally launched last week the tools that would bring a super simple way to make color vector fonts in Illustrator.

And today, to demonstrate the power of combining color lettering with digital typography, we join forces with five generous creative pioneers and the passionate folks at Adobe on a new initiative: #ColorFontWeek.

Over the next 5 days, you will be able to discover and download 5 free amazing color vector fonts that resulted from weeks of intense crafting, unrestrained research and super detailed work.

The 5 creatives who made them had to rethink what they knew about creating digital typography, entering into uncharted territories…

Creating color fonts means adapting to a few limitations, like the current lack of specific features like blending color in the OpenType-SVG standard or to optimize the number of color shapes into a single characters.

With few guidelines and no experience in such color font technologies, the 5 typographic explorers managed to come up with very inspiring designs.

Going from paper to digital typography is however something that many — like Matt Lyon — will still appreciate. And as you can see below it can lead to pretty powerful designs:

Without further ado, here are the results of this collaboration:

Like them? Then go ahead and download these beauties since they will be available only until Sunday Nov. 5 from https://www.fontself.com/colorfontweek/2018

Unfortunately, as we invited several designers to venture into this color vector font adventure, we have been overwhelmed by the amount and quality of projects they sent us, and haven’t been able to feature or praise all of their creators. But hopefully, we can soon get back to the news with additional colorful inspiration, as wild things have been done with the tools…

And if you love any of the 5 fonts, please like, share, high five, contract or simply thank the generous creatives who brought such wonderful designs.

These designers — and all the other people who have been involved in this #ColorFontWeek — really put a lot of love into it.

These guys definitely deserve our gratitude! 💯*🙏

Ok, so, … what happens next is a big unknown!

Will you guys be excited about all the crazy stuff one can build with color fonts, or will this just be a fad?

In any case, if you create some cool designs with these fonts, tag them with #ColorFontWeek — both the Illustrator & Fontself teams will highlight the best uses !!!

Obviously, we are biased to answer, but by combining the reach of apps like Illustrator and Photoshop with intuitive tools like Fontself Maker, we really hope that many of you will be able to follow the path of Alex, Yai, Igor, Maria and Matt, that you will question and challenge the status quo on what fonts are, what they could be, who can create them, use them, and hopefully let us — humans — become even more human and personal whenever we have something to say through text.

PS: are you an adventurous creative who wants to join the color font revolution? Here’s our own contribution to the #ColorFontWeek: 50% discount

on Fontself Maker, our font creation extension for Illustrator and Photoshop.

You will just have to relay the news about this deal in order to save up to $49. This offer is valid this week only, so hurry up!